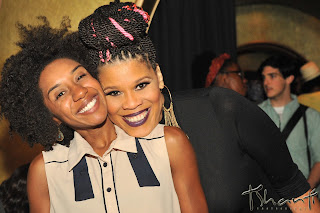 What is your full name? Makeda Declet

Where are you from? Brooklyn, New York
When did you fall in love with acting? I used to love watching Xena: Warrior Princess and Buffy the Vampire Slayer and wanted more than anything to be on those shows. I loved all the cool costumes and the fight scenes. I have an older brother who would always pick on me so I figured I'd become an actress, learn to fight, and then kick his ass! More than that though i fell in love with the idea of being able to play all these different characters who go on all of these different adventures. It brought a lot of hope to me as a little girl growing up in East New York, Brooklyn.
Are your Dreams and Goals different than those of your friends? If so, were they supportive? Was it challenging to be different? I think dreams and goals are unique by definition. I have my own path to follow even if it might look as though I’m moving in the same direction  as someone else from the outside. I don’t think it’s challenging to be different but there is a challenge in learning to accept and love my differences no matter what. I have a lot of close friends who are actors, writers, directors or otherwise creatives but we all try to remember that everyone’s journey to success is different. One of the best things i've done is surround myself with people who can support me as well as be supported and who challenge and love me for who I am. It’s incredibly satisfying to be able to collaborate with my peers and see each other climb the ladder. I also have two best friends from high school that I adore: one is in her last year of medical school and the other just moved to Australia. I learn a lot about hard work and adventure from them! It’s nice to have friends outside of the industry who can offer varying perspectives.

Who is supportive of your dream? How do they support you? My mom has always been extremely  supportive of me. She's done everything from drive 30 miles a day to take me to a performing arts high school to showing up at every one of my performances. I particularly love how genuinely curious she is about everything I want to do in life. Whether it be acting, hiking or learning to rock climb, my mom always has my back.

What are the steps you took to turn your dreams into action? Including study... Studying was a huge part of it for me. My early exposure to the arts came from learning about theater in school. I attended Philippa Schuyler School for the Gifted and Talented in Bushwick during middle school and “majored" in theater. It was the first time I had studied monologues and scenes and learned where Upstage Left was. I remember we did West Side Story in the 7th grade and I was really rooting for them to keep the Officer Krumpke song but of course they had to cut it out! My family moved out of New York a little before I started high school and I  attended Tri-Cities High in Atlanta, Georgia and they had an awesome magnet program that I was accepted into. I had my first experience being up on a big stage when I played Molly Cunningham in Joe Turner’s Come and Gone in the 9th grade. It was an experience I will never forget. Doing anything August Wilson is incredibly challenging but I knew that I wanted to be a serious actor so I auditioned for the role, won the role and then followed through with the work. I had my first on-stage kiss in that show! The summer before my Senior year of high school, I was accepted into the Governor’s Honors Program, which was a program that put high school kids up on a college campus and let them do a six-week intensive in their area of specialty (amazing program!). It was my first experience working with an acting company made up of people I didn’t know, learning about everything from Grotowski to downward dog and living away from home. G.H.P. inspired me so much that I started studying Mary Overlie’s Viewpoint technique which was a huge selling point to college admissions officers and I went on to earn my B.F.A. at NYU- Tisch School of the Arts where Mary was a professor. I’d heard stories of actors who had never studied acting becoming quite successful but I knew that studying was the way to go for me.
After graduating, I found that creating my own work was not only a rewarding expressive outlet but could become building blocks for my career as well. I wrote, produced and starred in my own Web series called Just Makeda - It’s about a girl who lives in a world where alter-egos exist as manifest themselves as puppets (I built all the puppets myself by hand!). Check it out at justmakeda.com.  La La La, doing creative stuff, yeah!

When and Why did you make the move to Los Angeles? Were you afraid? How did you push thru your fear? I moved to LA in 2012. I decided to stay in New York after graduating from Tisch and I booked a recurring guest star on Tyler Perry’s House of Payne a few months later off of a self-tape. I felt like I had a pretty good launching pad with the show on my resume and something told me that I needed to explore outside of my comfort zone. I became obsessed with moving to LA and within a month, I had given up my apartment in Flatbush, reached out to a friend in LA to sublet her place, and got on a plane with two suitcases and my mom’s favorite Ankh around my neck. A lot of my college friends were either natives of LA or migrated here over time, so I instantly felt like I had a community.  I was definitely nervous but to quote The Alchemist (because I'm reading it at the moment and getting my mind blown),  “Tell your heart that the fear of suffering is worse than the suffering itself. And that no heart has ever suffered when it goes in search of its dreams.” Moving to LA when I did felt right and supported. My mom was also living in New York at the time and made it very clear that I could always come home if i needed to.

What made you enter Twinkies Hollywood Monologue Slam? I was excited to meet Twinkie because she's a great casting director and a fellow Brooklyn gal. I was also working on a Monologue at the time and really wanted to share the character I'd created. It had been a while since i’d been on stage and from what i’d read on the Slam, it seemed like a powerful and magical event. I mean, how often do you get to go on stage at the Chinese Theater in front of a room full of folks who are there to support you?

What was your favorite Memory from the Slam? The Monologue Slam was such a cool experience!! I loved being interviewed by Twinkie’s team before-hand and hanging with the other contestants backstage. Everyone was so excited to be there and the positive vibrations were almost tangible.  I have to say that performing my second Monologue and feeling the audience being so incredibly open and receptive to me was the highlight of the evening. It was as though I had already won them over with the first monologue and they trusted me enough to sit back and enjoy my performance. The room was filled with calm, loving energy. It’s that moment where things align beautifully and you just get a series of affirmations and congratulations for doing good work. When Michael Ealy (who served on the panel of judges) said “see you on set”, I almost melted. It gave me chills!

How has life been since the Slam? An exercise in 'one day at a time'.

Were the Prizes Helpful to your career? Yes! Yes! Yes! I was awarded Bonnie Gillespie’s book ’Self Management for Actors’ and it is a must-read! I don’t have theatrical representation at the moment and reading this book has given me so much hope and self-empowerment! The prize of exposure has also been incredibly helpful. It can be challenging to overcome anonymity within an artistic career so I am very grateful that this opportunity allowed me to showcase some of my unique  gifts. The most invaluable and unquantifiable prize, however, was gaining Twinkie as a mentor. Twinkie has been kind enough to show me some of her wisdom, grace, and patience which are qualities needed to have a long and prosperous career. She is an incredible mentor with a huge working knowledge of the business as well as of life. I’ve also had the pleasure of having Niecy Nash (who was in the audience at the Slam) take me under her wing.  Both Twinkie and Niecy are incredible role models of how to be a strong, woman of color  in this industry! This is something that I didn’t realize I was missing but that has been great  nourishment for my soul.

Whats next for you? Well… I just flew back from Atlanta where I was shooting a recurring role on a huge TV show!!! Woohoo! I am so excited to tell you guys more about it when I get the thumbs-up to do so!

AND in the spirit of creating my own work, I am directing a staged reading of a play I wrote called "Nothing Left to Lose” on at The Michael Woolson Studio in LA . Come check it out! 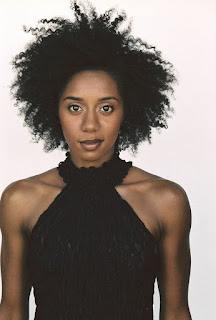 Thanks a lot for your valuable article. I will keep following your blog for more information.